Quite a while back I posted a few thoughts on the Beatitudes as taught by St. Augustine.  In fulfillment of my vague threat to post on the topic again, let’s look at how St. Bernard of Clairvaux interprets them in De Conversione.

St. Bernard addressed On Conversion to a group of potential converts to religious life.  To understand how things unfold, it will help to keep two things in mind:

His vivid opening sequence flows from this: he personifies Reason and Will as locked in a struggle for control of the Self.   END_OF_DOCUMENT_TOKEN_TO_BE_REPLACED

It took quite a bit longer than I expected, both in time and word count, but I made it to the end of my comments on St. Bernard’s ladder of pride and humility.  I will probably move this to the side bar eventually, but for now here’s a quick index of the posts covered.

A brief Introduction to the ladder and some general observations.

The First Step, which is Curiosity, including a comparison of the two ladders.

Steps 2-4, which culminate in Boasting.

Steps 5-6, which culminate in Arrogance.

Steps 9-10, False Confession and the Case of the Missing Tenth Step.

Steps 11-12, wrapping things up with sins both free and habitual, and a few final words.

I had intended to stay more reflective in my remarks, but it turned book-reporty as I was getting my thoughts in order.  Perils of the medium.  Now I can move on to more general comments on the Ladder!  Or work on his take on the Beatitudes.  Ooh, ooh, I know…

You’ve cast aside the brethren and overthrown the superior.  Who is left to pour contempt on?  God, of course.

The last two steps of pride are the hard case stages, served up with a healthy dose of irony.  Throughout the previous ten, one of the emergent properties has been lack of authenticity.  The exterior self in no way corresponds with the interior; the life of social interaction is completely conducted by a facade; there is no unity between perception and reality.

The abbot, or any superior, pierces that veil and confronts the deception of pride in steps nine and ten.  Assuming grace does not win out and the ladder of humility finally sees some use, the reaction is predictable:

You’re Not the Boss of Me!

You can’t tell me what to do!  The monk departs the monastery and finally embraces a certain authenticity that has been lacking all along…just of the wrong sort.  The rotten core becomes manifest and at the eleventh step we simply sin openly.

Remember, this entire business in the last few steps has been an enormous waste of energy.  There’s a grim logic to taking the next step down: why bother?  Why waste the energy?

This stage is the defiant pride that we (I, at least) most associate with Satan: a Miltonian fist-shaking at the heavens and a delight in disobedience.  I used to think of this as the rock bottom for sin, but really, how many people do you know like this?  This is a stage destined to be short-lived, I think.  Because the sins we love…

…stop being sins to us.  The last reversal of the genuine comes at the twelfth stage.  St. Bernard calls it habitual sin, but we have lost the sense of how dreadful that is I think.  What’s really at stake is that we move from a defiant embrace of our sins to no longer believing that they are sins.

At the bottom of the ladder we rush about, unburdened by interior resistance or conflict.  Sinners here are the mirror opposite of those at the top of the ladder, who run unburdened in the way of life.  Free!  Free at last!  It is the broken and defective counterfeit freedom that the world loves so much.  There is no more fear, for perfect malice drives out fear.  There is no more distraction, for distraction has become the last end.

How do you come back from that?  It can only be grace.  St. Bernard is drawing echoes from the Rule’s chapters on excommunication, wherein St. Benedict repeatedly emphasizes the role of prayer.  Prayer is the greatest medicine for the monk of grave faults.  Prayer is the divine remedy beyond any human punishments.  To jump traditions for a moment, St. Monica did more for her son than St. Ambrose ever did.

Now.  Would you ever try to convince someone to stop their habitual sin by laying out St. Bernard’s ladder for them?  The unburdened sinner who can no longer tell good from evil isn’t going to read, much less feel the impact of, a treatise like the Ladder.

The most important thing to understand about the Ladder is that the people reading it have already lived out this most fearsome stage.  It’s what they left behind when they entered the monastery or, more broadly, took up their conversion to the Gospel.

The monastery is a voluntary association of the well-intentioned, assembled by grace, trying to achieve spiritual perfection.  The very act of joining the monastery is the act of a sinner who has begun to change, who wants to climb, who wants to leave behind the evils that once sickened the soul.

When St. Bernard writes not to look back at Sodom and Gomorrah, he’s inspiring fear of God, sin, and self.  To indulge pride even in small ways is to slither back toward that life that you never, ever want to see again.  The fleshpots of Egypt, the wide fields of Sodom, that’s the old life.

On the ladder, between the top and the bottom, where interior resistance is strong and progress difficult, St. Bernard gives us the stick and the carrot, the whip and the bridle, reinforcement positive and negative.  Ahead there is Christ whom we love, to whom we rush headlong.  Behind there is our old life which we fear ever to see again.

“I have set before you this day life and death, blessing and curse.  Choose life.”

Get moving up that ladder.

In the last post, on presumption and self-justification, I mentioned that the second contempt would reach its culmination in step ten.  Here we are!  It’s contempt for the superior.

The arrogant come to believe they are due all goods and deny the evils they do.  But denial gets old and arrogant doesn’t mean stupid.  In order to maintain the aura of perfection and their control over the people around them, the arrogant resort to a more deceptive form of denial: false self-accusation. END_OF_DOCUMENT_TOKEN_TO_BE_REPLACED

A somewhat looser reflection on the Benedictine promise (we don’t call them vows) of stability.

In a previous post on St. Bernard I compared stability to commitment.  Here’s a small follow-up.

Fr. Scalia tells a great story about vocations talks he gives.  20 years ago the boys were most concerned with the Girls Question.  How could you live without them?  That was the anxiety.  But now he’s rarely asked that question, or at least it’s not Concern Number 1.  Now the primary concern of his audience is, “What if you change your mind?” END_OF_DOCUMENT_TOKEN_TO_BE_REPLACED

Back to climbing down St. Bernard’s ladder of pride.  Through the first four steps, the soul has lost its anchor and preferred appearances to reality.  Fundamentally these have been interior disturbances–a loss of focus on the good, a loss of agency and self-governance, a sorrow that craves pleasures to drown itself, a re-orientation that focuses the surrounding world on the self.

Now the proud person transitions to external realities.  We left off with boasting, both implicit and explicit.  This leads, in the fifth stage, to making those boasts reality.  It is no longer enough simply to think of ourselves as superior: we have to be seen such by others.  We devote considerable effort to constructing a life that others will admire without actually being admirable. END_OF_DOCUMENT_TOKEN_TO_BE_REPLACED

For this week of St. Anselm, God has so ordained things that two of my hobbies–Orlando Furioso and the Rule of St. Benedict–converge.  In his super-subversive Canto XIV, Ariosto lets us know what he thinks about the Benedictine monasteries of his day (XIV.75-95)

As the siege of Paris is about to go down, God tears a page out of Juno’s playbook and sends St. Michael the Archangel down to earth to make sure things play out according to divine plan.  “Michael!  Go find Silence and have him help the Christian reinforcements arrive undetected!  While you are at it, send Discord into the Muslim ranks to sow chaos.”

So–hmm?  Where’s an Archangel Defender of Paris to find Silence these days?  A moment’s thought by that pure intelligence reveals the answer: a place of prayer, naturally, where vows of silence prevail.  To a Benedictine monastery we go!   END_OF_DOCUMENT_TOKEN_TO_BE_REPLACED

I’ve hemmed and hawed for weeks on how to handle the next few chapters of St. Bernard’s ladder of humility and pride.  I’ve decided to try a larger, more structured post, something close to an article.  A bit outside my these-days comfort zone, but here goes.

First, for review, the two ladders:

Here we began our initial descent down the ladder of pride with a consideration of curiosity (not the good kind!).  The next three steps all go together along with the first: levitas animi, foolish merriment, and boasting.  What they have in common is the wind: the person becomes less grounded, less substantial, less real.

These stages, like the corresponding claims in St. Benedict’s original ladder, pose a lot of challenges to us who view levity and merriment as goods.  As ever, to explain the Benedictine way always seems to involve backing up a bit and guarding against neurosis and scruple.  Let’s start by getting clear on levity and its true opposite, stability.

It may help to back up to look at a passage I skipped over in previous posts.  When St. Bernard talks about Satan, he does not consider him deep under the earth or burning with the fire of hell.  In an arresting passage, he has him trapped between earth and heaven, spinning in the wind: END_OF_DOCUMENT_TOKEN_TO_BE_REPLACED

Here’s a comparison of two ladders: St. Benedict’s on humility and St. Bernard’s on pride.  I’ve reversed St. Benedict’s so that the rungs line up.  If you are at the top of this chart, you are doing pretty well!  At the bottom…not so much. END_OF_DOCUMENT_TOKEN_TO_BE_REPLACED

I posted a bit on St. Benedict’s 12-step program for humility–the daunting Jacob’s Ladder in chapter seven of his rule.  For some comments on the harrowing final rungs of that ladder, see the earlier post.  Now I want to turn to how another Benedictine saint riffed on that chapter. 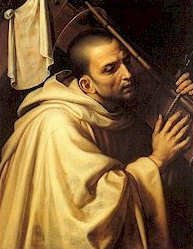 St. Bernard of Clairvaux is a criminally underrated spiritual author.  Or at least I criminally underrated him; reading him in college was a chore and I only came back to him in small, infrequent doses.  But again, getting inside the Rule a little bit changed me for the better.  Getting older probably helped.  When I re-read St. Bernard two years ago, he absolutely lit me on fire.  He has a profound insight into human nature similar to that for which St. Augustine is justly famous.  I was so stupid when I was nineteen!  I try to remember that when I’m teaching. END_OF_DOCUMENT_TOKEN_TO_BE_REPLACED